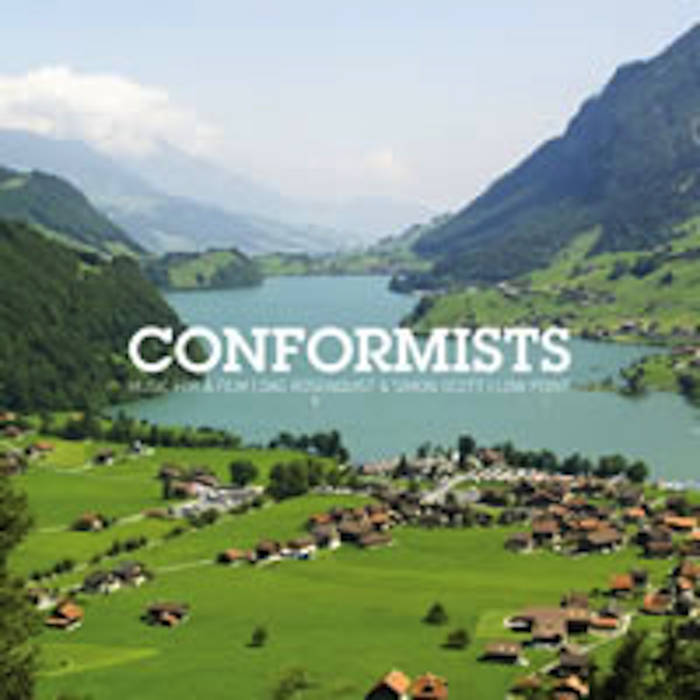 Conformists was written as a score for a film by the same name by director Jurian Booij. Rosenqvist and Scott composed the music before the film was even made, based entirely on a handful of storyboard images and the idea that the film was about the sway of group mentality on human actions. The result—a score to an imagined film—functions powerfully as a standalone work. The duo creates an alternately comforting and uneasy sonic space that conjures plenty of images of its own. Conformists is built largely on droning, sustained chords that slowly ebb and flow beneath crackling electronics, swells of fuzz, reversed sounds, and the occasional piano note. Though the music certainly has an ambient quality, it makes for a surprisingly engaging and melodic listen, broken with long moments of silence and the occasional jarring transitions. “Side A,” for example, slowly decays from a gentle, minimalist, horn-like figure into quiet bass pulses. After a gentle sway of reversed sounds, the tranquil texture is ripped apart by menacing church bell-like chords. A minute into “Side B,” sedate, held synth chords yield to abrasive, sputtering metallic sounds.

For the most part however, Conformists is defined by textural subtleties that make for a pensive, almost meditative listening experience. Textures transmute slowly, gradually revealing new tones and timbres that fade in and out of silence. When clear melodic motifs do appear—most obviously in the album’s final minutes, they carry a sense of haunting vacancy and sadness. When the last note fades out unresolved, the listener is left with a feeling of unease.

Like the best textural music, each listen exposes additional layers and colors. The dynamic changes draw you in closely, making for powerful psychological effects. The episodic, seemingly freeform nature of the compositions and bursts of alien sounds are countered by a deeply organic, slow-moving sense of development. The result is an evocative, unsettling work that immerses you fully in its own sonic world". www.tokafi.com/news/dag-rosenqvist-simon-scott-conformists/